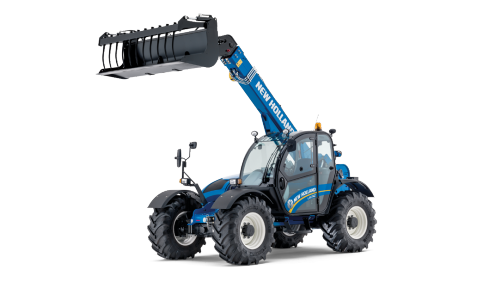 THREE LM MODELS, COUNTLESS APPLICATIONS.
At New Holland, we listen to our customers. We understand key telehandler demands vary from those seeking a telehandler with the reach to pick up, transport and stack large bales to those who need a compact machine that will see daily use for livestock duties - and everything in between. Choose from the LM6.32, LM7.42 Elite or the LM9.35. With the LM Series, New Holland has a telehandler to suit specific demands. - Less

THREE LM MODELS, COUNTLESS APPLICATIONS.
At New Holland, we listen to our customers. We understand key telehandler demands vary from those seeking a telehandler with the reach to pick up, transport and stack large bales to those who need a compact machine that will see daily use for livestock duties - and everything i... + Read More

HANDLES TOUGH CHALLENGES.
Three New Holland large-frame telehandlers have the reach to pick up, transport and stack large bales and dozens of other applications. See which model is best for you.

A SPECIFICATION TO SUIT YOUR NEEDS
New Holland offers two LM Series large-frame standard-configuration models--the LM6.32 and LM9.35. Powered by Tier4A 4.5-liter NEF engines, with a maximum power output of 121 horsepower, these telehandlers feature a 4F/3R (four forward and three reverse speed) powershift transmission. Gear selection is on the joystick, while a column-mounted power shuttle lever allows you to make convenient direction changes. A 31.7-gpm hydraulic gear pump and three-mode steering system add to the high level of performance offered. A limited slip differential is standard for the front axle. Transport speed is 25 mph. Designed for applications including material handling, yard work and stacking large bales, these affordable telehandlers are the ideal choice for broad-acre, mixed farm and contract applications.

ELITE POWER DELIVERS OPTIMUM PERFORMANCE
The LM7.42 Elite has a maximum power output of 143 horsepower. The 6F/3R powershift transmission offers automatic speed selection for speeds 4, 5 and 6, and a forward/reverse power shuttle using the main joystick. The three-mode steering system features automatic alignment. Based around a variable-displacement piston pump, the 36.9-gpm hydraulic system is operated via an armrest-mounted joystick. Offering precise proportional control with lightning-fast response, the hydraulic system makes Elite models the optimum choice for the most demanding operators. A high power-to-weight ratio enables these machines to carry out demanding tasks such as heavy material handling. A limited-slip differential is standard on both front and rear axles. With automated gearshifts and speeds up to 25 mph. Elite telehandlers are also well suited for fast transport. These combined features make Elite telehandlers the default choice for demanding farm and contract operators, since their high power enables them to deliver exceptional performance in the most demanding applications.

CLEAN PERFORMANCE, RESPONSIVE PRODUCTIVITY.
Large-frame LM telehandlers are powered by Tier 4A NEF 4.5 liter, four-cylinder engines. Proven in the New Holland T6 tractor models, these exceptionally clean-running engines have a long 600-hour service interval and a proven dependability record. Rated power outputs are 110 hp for the LM6.32 and LM9.35, and 129 hp for the LM7.42 Elite. These figures climb to 121 hp and 143 hp as engine speed drops to 1,800 rpm (1,900 rpm for LM7.42 Elite). Maximum output for the predecessor LM5000 models was 120 hp. To minimize power loss, the engine flywheel connects directly to the transmission via a heavy-duty 11-inch (280mm) torque converter, a transfer box directing power to the front and rear axles. All three models achieve a maximum 25-mph transport speed and transport mode is automatically engaged in third gear or at speeds exceeding 7.5 mph. This locks the rear steering wheels in the straight-ahead position, allowing steering from the front axle only.

UP TO 10% FUEL SAVINGS
When compared to previous LM5000 telehandler models, the latest ECOBlue™ SCR (Selective Catalytic Reduction) Tier 4A-compliant power units are not only quieter and more powerful, but they are also up to 10% more fuel efficient.

LM6.32 & LM9.35 TRANSMISSION KEEPS IT SIMPLE
A full powershift 4F/3R (four-forward and three-reverse speed) transmission is standard on the LM6.32 and LM9.35, with clutch-free changes between each gear. Simply choose speeds using buttons on the console-mounted joystick, and make direction changes with the forward-reverse shuttle lever on the steering column.

LM7.42 ELITE OFFERS AUTO FEATURES
The LM7.42 Elite features a powershift 6F/3R transmission with the ability to select Auto mode. Effective in speeds 4, 5 and 6, Auto mode selects the most appropriate gear in relation to engine and forward speed and is well suited for transport duties. You make gear and direction changes using the buttons on the armrest-mounted joystick.