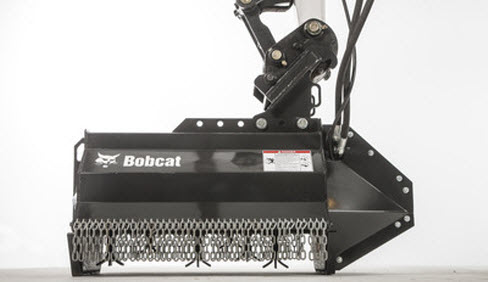 Attack your most difficult brush and sapling clearing projects with the Bobcat® flail mower. Easily shred vegetation on virtually any terrain, including hillsides, roadways, ditches, trails, riverbanks and utility right-of-ways, and other hard-to-reach places with the long reach of the excavator. Using powerful triple knife flails, you can mulch small branches, saplings, thick grass and other vegetation up to 4 in. in diameter.

Side safety chains help contain debris within the housing that could be thrown during operation. The rotor brake stops the attachment in 7 seconds or less after hydraulics are deactivated.

Rotating flail knives cut through material while the operator controls the cutting height by adjusting the arm of the excavator. Free-swinging knives rotate around the axis, catching the cut material in a cylindrical hood. The operator can reverse the direction of the knives by switching the hydraulic hoses at the drive motor.